The reproach of individualism is commonly leveled against economics on the basis of an alleged irreconcilable conflict between the interests of society and those of the individual.
Classical and subjectivist economics, it is said, give an undue priority to the interests of the individual over those of society and generally contend, in conscious denial of the facts, that a harmony of interests prevails between them. It would be the task of genuine science to show that the whole is superior to the parts and that the individual has to subordinate himself to, and conduct himself for, the benefit of society and to sacrifice his selfish private interests to the common good.
In the eyes of those who hold this point of view society must appear as a means designed by Providence to attain ends that are hidden from us. The individual must bow to the will of Providence and must sacrifice his own interests so that its will may be done. His greatest duty is obedience. He must subordinate himself to the leaders and live just as they command. 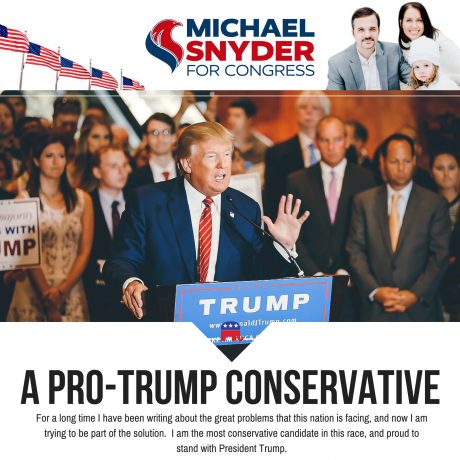 The most important deadline that we have faced so far is at midnight on Sunday, but I am not going to ask you for any money. I just want to say thank you to everyone that has donated, volunteered and prayed over the past six months. Without all of your efforts, it would have been impossible for us to be within striking distance of victory here in Idaho’s first congressional district with just a little more than four months to go until election day. When I first announced that I would be running, many people told me that it would be impossible for a political outsider to win in this district, but we are proving the naysayers wrong. We are so far ahead of where we thought that we would be at this point, and our opponents are literally freaking outover how well we are doing.
As the December 31st deadline approaches, my opponents have been sending out email after email in a desperate scramble for money. The reason why I know this is true is because we are on all of their email lists.
But I have decided that we are not going to do the same thing. Yes, we need support just as badly as they do, but I am simply going to trust the Lord that the resources will come in. We have already told our supporters what our needs are, and we are going to trust that the Lord will move in the hearts of those that are supposed to give.
The stakes in this race are exceedingly high. As we look at the numbers, it appears likely that one particular opponent is likely to emerge victorious if I do not win next May. If he wins, it will be a complete and utter disaster for the Trump movement.
This particular opponent fought to keep Donald Trump out of the White House, his campaign has repeatedly attacked my faith, and by lying over and over again he has demonstrated that he simply does not have the moral character to serve in Congress.

This post was published at The Economic Collapse Blog on December 30th, 2017.

Even the renown Public Library of Science (PLOS) Organization has stated plainly there is no evidence of Global Warming caused by human activity.
‘[O]nly 18% of the stations showed increases in water temperature that would be expected from global warming, partially reflecting the limits in detecting trends due to inherent natural variability of temperature data. Decreases in visibility were associated with increased human density. However, this link can be decoupled by environmental factors, with conditions that increase the flush of water, dampening the effects of human influence.’
SOURCE

This post was published at Armstrong Economics on Dec 31, 2017.

Done being a “fanboy” yet? No? You must like getting ripped off.
Hiding something you know is defective in a manner that will cause people to think their device should be replaced with a newer one, instead of either having it fixed under warranty or performing a relatively inexpensive repair, is outrageous.
Apple is being sued on this basis alleging consumer fraud, and IMHO rightly so.
Make no mistake — Apple only came clean after being caught. They didn’t tell anyone up front, they didn’t disclose the presence of the software change they made in anything like release notes that accompanied the new code, nothing.
They in fact said nothing despite people noting a problem until they were caught by irrefutable evidence that was presented to the public by a customer, and only thendid they come clean as to what they did.
That is evidence of bad faith and intentional misconduct and I hope the plaintiffs shove it so far up Cook’s and Apple’s ass that they can taste it.
That was not a mistake. It was in fact just the latest manifestation of what Apple as a company is — an extractive firm that has managed to create a religious cult of fervent grape Kool-Aid drinkers among Americans who parade around like they’ve got some part of God in their pockets and thus are blessed.
The truth does not matter to any of those fanbois however, nearly all of whom will keep buying their crap despite now having hard evidence that they’ve been intentionally screwed.