The following video was published by The Dollar Vigilante on Sep 29, 2017

Kazakhstan is gigantic. Over a million square miles – the size of Western Europe, or the U.S. east of the Mississippi – but with only 17 million people. In the east, on its 2,000-mile-long border with China, the Himalayas rise up out of the plains, but most of the country is just vast, desolate grasslands, or steppe. Two-thirds of the people are central Asians – tall, rangy looking Orientals who speak languages in the Turkic group; one third are Russians.
That’s information you can get out of any world atlas, and it’s not worth much, because nothing that everyone knows is worth much. What I want to do is tell you what I think it means. What’s going to happen in Central Asia in the near term and long term, and what you may want to do about it.
My friend Rick Maybury coined the term “Chaostan” for this whole part of the world. It’s populated by dozens of tribes and ethnic groups, most of them ex-nomads speaking different languages.
Perversely, the main things tying them together are a veneer of Soviet culture and the Russian language. And one other thing: an ingrained dislike of Russians. These folks have just never learned to appreciate the Russians conquering them, purging them, taxing them, destroying their indigenous cultures, and drafting them for their armies. They rather resent having been used as pawns in what used to be known as “The Great Game,” which was largely played between the Russians and the British in the 19th century.

An asymmetric trade is a situation where investing a relatively small amount of money holds the potential of yielding a profit many times the amount of the original sum at risk. In other words, where the risk to reward is skewed massively in the direction of reward.
This took place recently with Bitcoin (BTC). Is this conceptually different from bets made years ago on Microsoft, Cisco, Amazon, or Facebook, which yielded hundreds of percent profit to intrepid investors? Does it have relevance to the possible returns during the next few years for those who hold physical gold and silver?
I would answer “yes” and “yes.”
The current “mania” in the cryptocurrency space – most notably BTC and Ethereum (ETH), along with a few other “app coins” – offers an in-future lesson for a similar setup in the precious metals. (For more on the above topic, see “The Blockchain: A Gold and Silver Launchpad?”
First: This may be the first time ever that an investment “story” has had the ear and investment dollars of a global audience on a simultaneous basis. Individual investors, hedge funds, businesses, and even countries, are sending a torrent of funds, with the effect, to paraphrase Doug Casey’s famous remark, of “trying to push the power of the Hoover Dam through a garden hose.”

This post was published at GoldSeek on Friday, 23 June 2017.

The following video was published by Peter Schiff on May 5, 2017 You’ve probably heard people say gold is real money, but what does that actually mean? Is there some fundamental difference between gold and the green pieces of paper stuffed in your wallet that we call money? As investment guru Doug Casey put it, ‘The dollar is, technically, a currency. A currency is a government substitute for money. But gold is money.’ So, what is money? Simply put, it is a medium of exchange and a store of value.
Almost anything can be used as money, and, in fact, many things have served the purpose. Cattle, salt, cigarettes, and even seashells have been used as money throughout history. But as Casey points out, some things work better others. You can’t just exchange things nobody wants; there are other practical considerations. Over the last millennium, precious metals – primarily gold and silver – have evolved into the best form of money in existence.
‘These are the reasons why gold is the best money. It’s not a gold bug religion, nor a barbaric superstition. It’s simply common sense. Gold is particularly good for use as money, just as aluminum is particularly good for making aircraft, steel is good for the structures of buildings, uranium is good for fueling nuclear power plants, and paper is good for making books not money. If you try to make airplanes out of lead, or money out of paper, you’re in for a crash.’
Aristotle listed five properties that make something suitable for use as money. Casey outlines them in his article:

Nick Giambruno: Doug, you predicted the fall of the European Union a few years ago. What has changed since then?
Doug Casey: Well, what’s changed is that the entire situation has gotten much worse. The inevitable has now become the imminent.
The European Union evolved, devolved actually, from basically a free trade pact among a few countries to a giant, dysfunctional, overreaching bureaucracy. Free trade is an excellent idea. However, you don’t need to legislate free trade; that’s almost a contradiction in terms. A free trade pact between different governments is unnecessary for free trade. An individual country interested in prosperity and freedom only needs to eliminate all import and export duties, and all import and export quotas. When a country has duties or quotas, it’s essentially putting itself under embargo, shooting its economy in the foot. Businesses should trade with whomever they want for their own advantage.
But that wasn’t the way the Europeans did it. The Eurocrats, instead, created a treaty the size of a New York telephone book, regulating everything. This is the problem with the European Union. They say it is about free trade, but really it’s about somebody’s arbitrary idea of ‘fair trade,’ which amounts to regulating everything. In addition to its disastrous economic consequences, it creates misunderstandings and confusion in the mind of the average person. Brussels has become another layer of bureaucracy on top of all the national layers and local layers for the average European to deal with.
The European Union in Brussels is composed of a class of bureaucrats that are extremely well paid, have tremendous benefits, and have their own self-referencing little culture. They’re exactly the same kind of people that live within the Washington, D.C. beltway.

The following video was published by SilverDoctors on Apr 18, 2017

Doug Casey and I recently chatted about Trump and what his presidency means for the stock market. We also hit on the War on Cash, bitcoin, and a big third-world problem that’s headed straight for the US.

The following video was published by Greg Hunter on Mar 21, 2017
What is this going to look like to the man on the street when the economy melts down again? Financial expert Doug Casey says, ‘The country has been living way above its means. The U. S. runs about a trillion dollar trade deficit with the rest of the world, but it’s a great deal for us. The U. S. prints up dollars and we ship them dollars, and they send us Sonys and Mercedes and coffee and all sorts of things imported into this country, but that can’t go on forever. So, what’s it going to look like? It will be very high levels of inflation. In 2007 to 2009, people lost their jobs. When a society is living above its means, people like waiters and bartenders . . . they’re fired because people are going to have to do those things for themselves. So, you are going to see lots of unemployment. There could be a lot of social upsets in this country.’
What about gold and silver? Casey says, ‘A number of governments around the world, not the U. S. but the Russians and the Chinese, are buying a lot of gold. Why? Because it’s the only financial asset that is not simultaneously somebody else’s liability. It doesn’t matter whether we have runaway inflation or catastrophic deflation, the gold is there. It’s an actual asset unlike the paper governments’ print up. There is no point in owning paper today because interest rates are so low. Interest rates are below the level of actual inflation at this point. People should buy gold and they should buy silver. . . . They’re going to both go up. I’ll say this again, gold and silver are the only assets that are not simultaneously someone else’s liability. So, there is going to be a panic into them at some point, and some point soon I think.’ 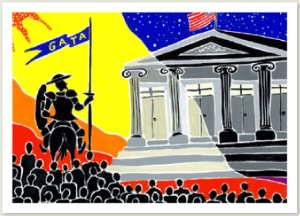 GATA Board of Directors member Ed Steer, publisher of the daily Ed Steer’s Gold and Silver Digest letter will speak at Cambridge House’s Vancouver Resource Investment Conference, to be held Sunday and Monday, January 22 and 23 at the Vancouver Convention Centre West in Vancouver, British Columbia, Canada.
Also speaking, among others, will be Peter Schiff of Euro-Pacific Capital, Frank Holmes of U.S. Global Investors, Doug Casey of Casey Research, Peter Spina of GoldSeek.com and SilverSeek.com, David Morgan of The Morgan Report and Silver-Investor.com, Thom Calandra of The Calandra Report, Rick Rule of Sprott U.S. Holdings, Tommy Humphreys of CEO.ca, Keith Neumeyer of First Majestic Silver Corp., and Andy Schectman of the Miles Franklin bullion dealership.
As usual scores of resource companies will be exhibiting. A discounted rate will be available to conference participants at the Fairmont Waterfront hotel across the street from the convention center.
Admission will be free with advance registration and otherwise will cost C$20 at the door.

Revolver or Semi Auto to protect your Silver Stack

Covid-19: Is Herd Immunity Possible At This Point?

The Next Pandemic Will Be Caused by the National Debt. It Will Crater the Economy.