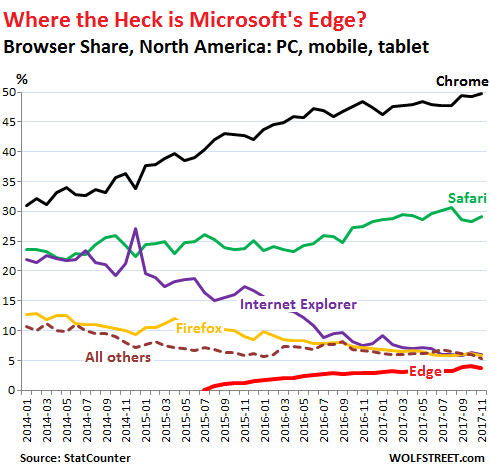 In the North American Browser War, there is only one winner.
When Microsoft released its super-duper Windows 10 in July 2015, it aggressively pushed people with Windows 7 and 8 to ‘upgrade’ for free to what has turned out to be highly functional and slickly presented corporate spyware. Since then, Windows 10 has been the default system pre-installed on most desktops and laptops sold in North America. It worked: According to StatCounter, Windows 10 now runs on 49% of all PCs (desktop and laptops) in North America.
All Windows versions combined, including Windows 10, run on 74% of PCs in North America, with Apple’s operating systems running on 21%, Chrome OS on 3%, and Linux on 1.6%.
Part of the goal of Microsoft’s push to get people to install Windows 10 was to get them to use Edge, the browser that comes with Windows 10, so that Microsoft could more seamlessly track what these people are doing on the Internet. But people are spurning Edge.

I have been thinking about the problem of politically rigged computers ever since 1980.
I was first tipped off to this problem by a highly skilled computer programmer. He told me that he could program a computer program that would be used to count the votes in local elections. He said he could program the outcome of the voting. He insisted that this would not be easily discovered. I believed him.
Not long afterwards, I read a book by Adam Osborne, who invented the ill-fated Osborne portable computer: Running Wild (1979). In that book, he warned against two areas of computer technology that could lead to disasters. One of them had to do with interbank transfers of data. He thought the programs could be rigged to favor the siphoning off of large amounts of money by means of tiny amounts in individual transactions. He said that this would not be identifiable. The other area was digitized voting. He said that it would be too easy to rig the computers to elect someone who in fact did not get the most votes.
Here is testimony under oath by a computer programmer who said that he wrote such a program that was used in an election.

Goldman Sachs’ Sumana Manoghar, Hugo Scott-Gall, and Navreen Sandhu wax lyrical in their introduction to the 100 most interesting charts of 2017…
In this very special edition, straight from our hearts, We pro?le 100 of our best and most compelling charts. They tell the story of a changing world; and below it starts. But for now we’ll quickly run you through the major parts.
We begin with rising capex: Who is spending to defend? Is disruption overrated? Who else can Amazon upend? The potential in India? Can China’s overcapacity mend? Are people eating healthier? How do millennials spend?
We explore each of these themes and tell you how they link. We have some fun charts in here too. And surprises. Wink wink. We hope they join the thematic dots as you see them in sync, But most of all we hope that these charts make you think.
There are quotes, stats, and a crossword also in here, Plus a thematic poster to spread the holiday cheer. Let us know what you think and if anything is unclear, We’ll be back soon with more. Until then, Happy New Year.

A few weeks ago, we expressed some level of astonishment that the rating agencies, in their infinite wisdom, decided to bestow an investment grade rating upon a new $3 billion bond issuance by the City of Chicago. Of course, this wouldn’t be such a big deal but for the fact that the state of Illinois is a financial disaster that will undoubtedly be forced into bankruptcy at some point in the future courtesy of a staggering ~$150 billion funding gap on its public pensions, a mountain of debt and $16.4 billion in accrued AP because they can’t even afford to pay their bills on a timely basis. Here are just a couple of our recent posts on these topics:
Illinois Pension Funding Ratio Sinks To 37.6% As Unfunded Liabilities Surge To $130 Billion Illinois Unpaid Vendor Backlog Hits A New Record At Over $16 Billion The State Of Illinois Is “Past The Point Of No Return” Alas, as Capitol Fax notes this morning, it seems as though Moody’s may finally be waking up to the farce that is their own municipal ratings system and is currently in the process of seeking comments from market participants on proposed changes for states’ general obligation credit ratings, which would include an increased emphasis on debt and pension obligations. Of course, with their GO rating just one notch above junk, all of those long-only bond funds that have scooped up billions in ‘juicy’ 4% Illinois paper over the past couple of months should probably take notice.

Two months ago, in Europe’s latest shocking, anti-establishment outcome, Austria’s 31-year-old Sebastian Kurz became the world’s youngest leader after his conservative People’s Party won the Austrian National Council elections, making him Austria’s youngest Chancellor in history, while the establishment Social Democrat party suffered its “worst result since Hitler rule.”
***
And now, two months later, in a double whammy for Europe’s outraged liberal establishment, the anti-immigrant Freedom Party of Austria (FPO) – which finished third in October’s elections with 26% of the vote, less than a percent behind the Social Democrats, has joined a coalition government with Sebastian Kurz and his People’s Party (OVP). The agreement between the People’s Party and the Freedom Party, which is returning to government after more than a decade’s absence, was struck on Friday, the two parties’ leaders, Sebastian Kurz and Heinz-Christian Strache announced in a joint news conference.

OK, believe it or not, the Australian government wants sweeping changes in the Catholic Church and other organizations, including making celibacy voluntary for clergy, but the real kicker is that they want priests to report people who confess sins in church. Politicians no longer have respect for religion or the beliefs of people. To them, there is no God, only their power. This is getting really insane.

This post was published at Armstrong Economics on Dec 17, 2017.

‘With Friends Like These…’ Spain Tries to Scupper Italian Takeover of ‘Strategic’ Company By Don Quijones, Spain, UK, & Mexico, editor at WOLF STREET. The race is on in Spain to stop Atlantia SpA, an Italian infrastructure group majority owned by the Benetton family, from buying Barcelona-based toll-road operator Abertis Infraestructuras SA. Atlantia SpA made a 16.3-billion ($19 billion) bid for Abertis back in May. Thanks to the fact Atlantia can borrow money at an absurdly low rate (grazie mille, Signor Draghi), most of its bid is in cash.
Spain’s government has taken a keen interest in proceedings. ‘It doesn’t please us at all,’ said senior government sources in May. The Rajoy government claims that the motorways controlled by Abertis, both in Spain and overseas, as well as its majority stake in Hispasat, the world’s ninth largest satellite operator, represent national strategic assets.
The biggest concern appears to be over the prospect of decisions pertaining to Abertis’ assets being made in another European capital, though according to sources cited by Expansin, the real reason is that the Spanish government ‘doesn’t want Abertis in Italian hands – it’s as simple as that.’

The U.S. Debt Ceiling is Back

Why Do Governments Lie About Inflation?

A Market Implosion Is Inevitable Next Year | Michael Pento