This is a syndicated repost courtesy of Money Morning. To view original, click here. Reposted with permission.
(Kitco News) – World stock markets were mostly firmer in quieter trading Thursday. U. S. stock indexes are also pointed toward modestly higher openings when the New York day session begins.
Gold prices are weaker, amid bearish ‘outside markets’ today-firmer stock markets and U. S. dollar index, and weaker crude oil prices.
Stock, currency and financial markets have been quieter this week, ahead of the highly anticipated annual world central bankers meeting in Jackson Hole, Wyoming, that begins today. Featured speakers at the three-day event include Federal Reserve Chair Janet Yellen and European Central Bank President Mario Draghi. Traders and investors will closely examine the Jackson Hole speeches for any clues on future monetary policy moves by the world’s major central banks. There are ideas the central bankers will mention very low inflation, which could be extrapolated to mean keeping very accommodative monetary policies in place longer. Draghi’s remarks are likely to impact the Euro currency, especially after the ECB has recently expressed a bit of concern about the appreciation of the Euro. In recent years the Jackson Hole central bankers confab has significantly moved the markets.

This post was published at Wall Street Examiner on August 24, 2017.

Eight months after the Russian ambassador to Turkey, Andrei Karlov, was shot dead in broad daylight, on Wednesday yet another Russian ambassador has died. According to Russian news agency RIA Novosti, the Ambassador of the Russian Federation to the Republic of Sudan, Mirgayas M. Shirinskiy, was found dead in his home in Khartoum Wednesday.
***
Al Arabiya adds that the ambassador was found drowned in the swimming pool at his home.
Employees of the embassy discovered Shirinsky at his residence around 6pm local time, the press secretary of the Sudan mission, Sergey Konyashin, according to RT. The diplomat, who was 62 years old, appeared to have symptoms consistent with a serious heart seizure, Konyashin said, adding that doctors were immediately called to the scene, but were unable to save his life.

As if defined benefit pensions funds weren’t fun enough for corporate shareholders, the Pension Benefit Guarantee Corporation (PBGC), the federal entity that backstops pension obligations when companies default, has enacted massive increases in insurance premiums for operating such plans over the past 5 years.
Ironically, the premiums started to skyrocket during Obama’s second term with flat-rate premiums nearly doubling from $35 per participant in 2012 to $69 per participant in 2017. Moreover, the variable rate premium paid by corporations nearly quadrupled over the same period from $9 per $1,000 of Unfunded Vested Benefits (UVBs) to $34.
***
Meanwhile, the rate-hike party at the PBGC is hardly over. Corporate pension operators can expect another 16% and 24% hike in flat and variable-rate premiums, respectively, over just the next two years. Which should be plenty of money to hire a bunch of new bureaucrats…

The signs are everywhere for those willing to look: something has changed beneath the surface of complacent faith in permanent growth. This is more intuitive than quantitative, but my gut feeling is that the economy just stumbled off a cliff. Neither the cliff edge nor the fatal misstep are visible yet; both remain in the shadows of the intangible foundation of the economy: trust, animal spirits, faith in authorities’ management, etc. Since credit expansion is the lifeblood of the global economy, let’s look at credit expansion. Courtesy of Market Daily Briefing, here is a chart of total credit in the U. S. and a chart of the percentage increase of credit. Notice the difference between credit expansion in 1990 – 2008 and the expansion of 2009 – 2017. Credit expanded by a monumental $40+ trillion in 1990 – 2008 without any monetary easing (QE) or zero-interest rate policy (ZIRP). The expansion of 2009 – 2017 required 8 long years of massive monetary/fiscal stimulus and ZIRP.

This post was published at Charles Hugh Smith on WEDNESDAY, AUGUST 23, 2017.

– U. S. Navy collisions: More than a coincidence?
– Latest U. S. Navy collision is fourth involving a Seventh Fleet warship this year
– Have US Navy vessels become victims of hacking asks Rickards
– Chief of Naval Operations, Adm. John Richardson, has not ruled out cyber intrusion
– ‘Once is happenstance. Twice is coincidence. The third time it’s enemy action…’ – Ian Fleming
– Cyber security cause for concern in autonomous vehicles, aeroplanes and now ships
– Serves as reminder that a connected world can expose and create vulnerabilities
– Cyber security a major threat to banking and financial industry
– Investors should hold physical gold as insurance against hacking, cyber attacks
***
The tragic U. S. Navy incident of the USS John McCain earlier in the week has raised several questions about the cause. Many are wondering if it was more than human error given this is not an isolated incident.

The Dow Jones Industrial Average has moved down close to 600 points off of the high that was struck on August 8th into August 21st lows. Now in percentage terms, this 600 point move is quite a small only representing a move of just 2.6%. In fact, at today’s close, the Dow was only down some 1.2% off of the August 8th high. Furthermore, the move down into the August 21st lows has still not even breached the top of the upper support zone.
The Dow has certainly been trending down over the past two weeks; It does however still has more work to do before we can confirm that a larger degree top in place.
Anecdotal and other sentiment indications
While the Dow dropped a total of only 1.5% from the initial August 8th high into the August 11th low. The VIX index almost doubled during the initial move down off of the highs. It then moved up 44% on the second move down on the Dow from the August 16th high into the August 21st lows. Furthermore, the VXX moved up almost 29% during this initial drop and 12% during the secondary drop.
Given the historically low levels that the VIX had seen over the past several months, a ‘reset’ in Volatility was certainly due. The reaction in the volatility markets, however, was certainly well out of proportion to what we would typically expect to see with such a small drop in the equity markets. Since those highs both the VIX and VXX have
Since those highs both the VIX and VXX have moved significantly lower but are still trading up off of the lows that were set prior to the start of the move lower in the equity markets.

This post was published at GoldSeek on Thursday, 24 August 2017. 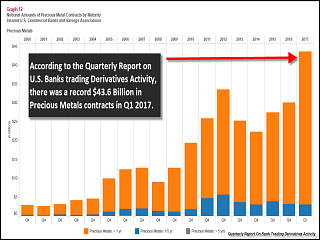 According to the most recent report on the U. S. Financial Institutions Derivatives trading activity, the U. S. banks held a record amount of precious metals contracts in the first quarter of 2017. Not only did the U. S. banks report a record amount of precious metals contracts, but they also held an unprecedented quantity in notional value of commodity and equity derivative contracts.
There just seems to be a lot of paper floating around in our highly inflated stock, bond, and Forex markets. And… there needs to be. Without an ever increasing amount of leverage via their derivative bets and hedging, these markets would be in serious trouble. Furthermore, the practice of using contracts to hedge bets upon on other derivative bets has put the financial market in a highly fragile state.

This post was published at SRSrocco Report on AUGUST 23, 2017.

Connecticut Governor Daniel Malloy is among the country’s least popular governors after forcing through two tax hikes that sent individuals and corporations fleeing from the state. Luckily for the state and its people, Malloy apparently has no interest in sticking around to take the heat when it comes time for the next hike: He has announced that he will not seek a third term.
Connecticut has gone without a budget for two months, and is facing devastating cutbacks in municipal services if one isn’t passed soon. But Malloy took time off this week from grappling with legislators to speak with a reporter from Reuters, he offers little insight into what lead to the state’s precarious fiscal situation. Instead, he blames it on overspending on prisons.
“The state invested in the wrong things for a period of time. It allowed its higher educational institutions to suffer while it sought to placate communities with respect to other forms of local reimbursement,”Malloy told Reuters during an interview in his office on Thursday.
“We built too many prisons, which we’re still paying off even while we’re closing them,” he said. The Democrat took office in 2011 and is not seeking a third term.’

College is going to be one of the biggest investments of your life…
***
…which is why you should just trust what the student loan companies tell you without even thinking twice about how much you could be screwed after school has ended. 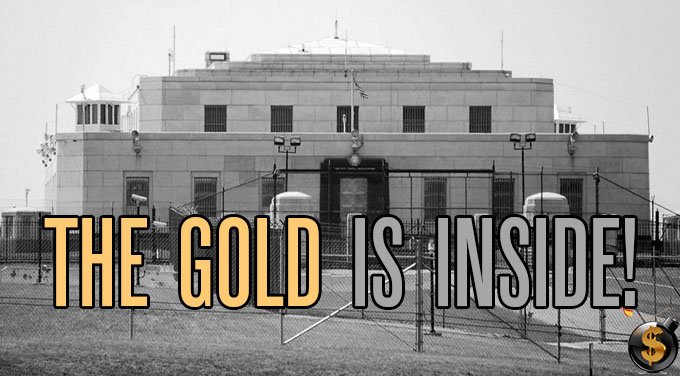 Imagine it was 1937 and you stored your gold with someone… let’s call them Uncle Sam.
After about 20 years you told Sam that you’d like to see the gold and make sure it was still there. He said sure; you can come and take a quick look. And you did… and you were satisfied that it looked like the gold was still there.
Decades then went by… more than 40 years in fact… and you told Sam that you’d like to make sure the gold is still there.
He replied, ‘Sure, but you can’t count it or touch it or anything. You can just look through the window and see it is still there.’
‘Oh, and another thing,’ said Sam, ‘We get to select the person who can take a quick look.’
You’d start to get quite suspicious, wouldn’t you? It had been more than 40 years since you were even allowed to see the gold and more than 60 years since the last time Sam allowed you to count it.

This post was published at Dollar Vigilante on August 24, 2017.

Being Here
‘As long as the roots are not severed, all is well. And all will be well in the garden.’
– Chauncey Gardner (Chance, the Gardner)
This piece takes a roundhouse swing at politics, real and imagined, and discusses critical economic issues that politicians should actually apply a little intelligence to, but are not. Capitalism will ultimately set things right, but it will have to overcome the political dimension’s best efforts to ignore real issues.
***
The Real Deal
An important character trait for wealth creation today seems to be incuriosity – find out what’s working, hop on board, enjoy the ride and don’t ask questions. Growth and value metrics seem to matter less than they used to, and so investors have turned their gaze to macroeconomics and, gulp, politics.

I Wish Everyday was Thanksgiving – The Calm Before the Storm

Rafi Farber: Is there REALLY a big silver short position?

Global Elites Plan To Take Over The World (Revealed)

The Economy is Going to the Birds – Banks are Getting Nervous

On the Brink of Chaos