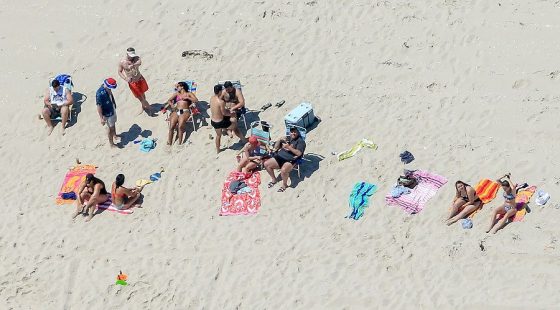 If you have ever thought that the government is ‘for the people’ and ‘by the people,’ think again. Politicians are continuing to prove that they know they are better than and more equal than the rest of us.
New Jersey Governor Chris Christie ‘shut down’ the Garden state’s government over the holiday weekend over an inability for the elected politicians to agree on a budget. But Christie didn’t really shut down the government. He made sure there are cops extorting people on the roads they were stolen from to pay for, and he’s still collecting taxes and sending out welfare checks. All he really did, was ruin the holiday weekend for the peasants unfortunate enough to live under his rule. He closed the parks and beaches and made those already camping pack up and go home.

This post was published at The Daily Sheeple on July 3, 2017.

S&P500 futures have started the second half solidly in the green, up 0.3% to 2,429, tracking European markets broadly in the green, while Asian stocks fell slightly and crude oil is little changed. With US markets set to close at 1pm today trading volumes in many markets remain light before Tuesday’s July 4th holiday and as investors await Friday’s report on the American jobs market. Traders will be looking at key upcoming economic data for validation of the hawkish shift from central banks that roiled markets last week.
The Asian session opened with the Yen initially strengthens following Prime Minister Abe’s shocking election loss in the Tokyo Assembly elections, but later reversing gains to trade materially weaker at 112.95 last, on speculation Abe will be forced to inject more stimulus to salvage his standing amid a muted reaction to strongest Tankan survey since 2014. Australian 10-year yield rise four basis points; T-note yield two basis points firmer at 2.32%; shares in Tokyo and Sydney steady in narrow ranges. MSCI’s broadest index of Asia-Pacific shares outside Japan held steady, staying within a stone’s throw of a two-year peak hit last week. Japan’s Nikkei ticked up 0.1 percent, helped by the solid Tankan report.
In China, the PBOC drained liquidity for ninth day, pulling a net 70 billion yuan; Hong Kong’s Hang Seng and the Shanghai Composite climbed 0.1 percent amid concerns the world’s second-biggest economy could be slowing down. In Hong Kong financial shares benefited from the launch on Monday of the “Bond Connect” scheme linking China’s $9 trillion bond market with overseas investors. Industrial metals rose across the board after the Chinese Caixin Mfg PMI rebounded back into expansion territory, rising to 50.4 in June from 49.6 in May, and beating estimates. Dalian iron ore 2.3% higher: the benchmark iron ore contract climbed on Friday for its best one-week gain since November and is up almost 22% from its $53.36 June 13 low, which by definition places it in a bull market. China’s bond connect program with Hong Kong will give offshore investors another way to access the mainland’s $10 trillion debt market.

Trump is clearly his own worst enemy. As long as he feels he must lash out at anyone in the media who bashes him, he only gives more attention to what they are doing and it is to their benefit to now criticize him hoping he lashes out making them more famous. I agree, his comments are not presidential. Just ignore them and he might find there is nothing left to bash him about, Just do the damn job. His tweet read:
‘I heard poorly rated @Morning_Joe speaks badly of me (don’t watch anymore). Then how come low I. Q. Crazy Mika, along with Psycho Joe, came to Mar-a-Lago 3 nights in a row around New Year’s Eve, and insisted on joining me. She was bleeding badly from a face-lift. I said no!’
House Minority Leader Nancy Pelosi and other Democratic leaders have been telling Democrats to stop calling for impeachment. Pelosi loves the Tweets that keep Trump in controversy after controversy where the 2018 election will be all about how he is unfit to be president because of his lashing-out.

This post was published at Armstrong Economics on Jul 3, 2017.

For your holiday listening pleasure, Jim Willie returns for a comprehensive discussion of the petrodollar and how current events around the Arabian Peninsula are a sign of great distress for this monetary scheme.
Again, what is the “petrodollar”. The idea was championed by Henry Kissinger in 1973 as a way to create ongoing demand for US dollars by maintaining the pricing of crude oil in dollars only. The effects of this were two-fold:
To create constant demand for dollars…dollars which were now completely unhinged from any gold backing…and this demand would soak up any excess supply of new currency being printed in the US for military and social purposes. To force oil-exporting nations to keep their foreign currency reserves in dollars, thus creating an ongoing demand for US treasury bonds. This constant demand for bonds would help to keep interest rates…and thus the US debt service cost…unnaturally low.

This post was published at TF Metals Report By Turd Ferguson /July 3, 2017.

Sometime in the coming days, the London Bullion Market Association (LBMA) plans to begin publishing gold and silver vault holding totals covering the network of commercial precious vault operators in London that fall under its remit. This follows an announcement made by the LBMA on 8 May.
There are seven commercial vault operators (custodians) in the LBMA custodian vault network namely, HSBC, JP Morgan, Brinks, Malca Amit, ICBC Standard Bank, Loomis (formerly Viamat), and G4S. Note that ICBC Standard Bank has a vault which is operated by Brinks on behalf of ICBC Standard. It is also quite possible that some of the HSBC vaults, such as the famous GLD gold vault, are located within Brinks facilities.
Adding in the Bank of England gold vaults under the Bank of England’s head office in the City of London, the LBMA vaulting network comprises eight sets of vaults. However, the Bank of England vaults do not store silver, or at least there is no evidence that the Bank of England stores silver. However, the other 7 vault operators can and do store silver, or at least most of them do. It’s unclear whether the G4S vault stores anything on behalf of anyone, but that’s a different story.
The forthcoming LBMA vault data will represent actual physical gold and silver holdings, i.e. real tangible precious metals, as opposed to the intangible and gargantuan paper gold and paper silver trading volumes generated each day in the London precious metals markets.
The LBMA will report physical holdings data on an aggregated basis for each of gold and silver, i.e. one quantity number will be reported each month for vaulted gold, and one quantity number will be reported each month for vaulted silver. The LBMA data will be on a 3-month lagged basis. For example, if the LBMA begins reporting this data in early July (which it probably will), then the first set of data will refer to the end of March period.
The uncertainty as to when the LBMA will begin to publish its vault holdings data is purely because the LBMA has not provided a specific publication commencement date. At first, the LBMA announced that the reporting would begin ‘in the summer’. Subsequently, it announced that it’s vault reporting would begin in July.
As to whether the LBMA vault holdings numbers published each month will include or exclude the Bank of England gold vaults holdings is also unclear. At the end of April, the Bank of England went ahead and separately began to publish vault holdings numbers for its own gold vaults, also on a 3-month lagged basis. More information on this Bank of England initiative can be read in BullionStar blog ‘Bank of England releases new data on its gold vault holdings’

This post was published at Bullion Star on 3 Jul 2017.

Germany’s Chancellor Merkel is determined to create problems at the upcoming G20 meeting in Hamburg July 7-8. She is a brainwashed climate supporter who has refused to listen to over 31,000 scientists who have joined together against this Global Warming fraud. The Paris climate meeting refused to allow anyone to speak in opposition. They have turned this into a religious quest all to cleverly raise taxes. Merkel said that the gathering of world leaders in Hamburg would be difficult given Trump’s climate skepticism and ‘America First’ position. She said that she was determined to seek a clear commitment for the Paris accord against global warming and a pledge against protectionism from Trump. Talk about a brain-dead confrontation. Protectionism is one thing, but climate is more likely to block any other possible cooperation.

This post was published at Armstrong Economics on Jul 3, 2017.

As the oppressive regime of leftist autocrat Nicolas Maduro intensifies its crackdown on anti-government protesters who have been gathering daily in the streets of Caracas and other Venezuelan cities to demand regime change, the government’s body count continues to climb. Last week, one such government-sanctioned killing was caught on video. The chilling footage shows Venezuelan soldiers shooting a 22-year-old rioter in the chest after he hurled rocks at them.
***
The Associated Press reports that at least four people were killed and eight injured during anti-government protests in central Venezuela on Saturday. The deaths brought to at least 80 the number of people killed since anti-government protests erupted three months ago.
‘Chief prosecutor Luis Ortega Diaz confirmed that four deaths occurred Friday in clashes in Barquisimeto. The city’s mayor blamed the deaths on armed militias that support Venezuela’s socialist government.’

When This Runs Short, Watch Out!

Do silver miners realize the price is suppressed

How to find silver in Mexico