Robert McEwen, one of the gold’s industry’s most unabashed bulls, is predicting prices could surge as much as 44 percent by the end of the year as confidence in the economy buckles.
The metal could trade in a range of $1,700 an ounce to $1,900 by the end of 2016 as uncertainty builds around the stability of global currencies and sovereign debt, said McEwen, who’s so enamored by bullion that he’s founded two producers: McEwen Mining Inc. and Goldcorp Inc. Record-low global interest rates will cause a ‘huge amount of anxiety’ for investors, who will turn to gold as a store of value and an alternative asset, he said.
Gold ‘is a currency that doesn’t have a liability attached to it,’ McEwen said Tuesday in an interview at a gold conference in Colorado Springs. ‘A store of value that has gone for millennia. And the big argument against gold used to be it costs you money to store it. Right now, it’s costing you money to store your cash.’

During his interview with This is That, U.S. legislator John Grumpart did not shy away from sharing his thoughts about why he believes Canadians should not be driving in the United States.
Wow! I’m dumbfounded! This rather shocking and amazing 5:27 minute audio interview was posted on the Canadian Broadcasting Corporation‘s website last Thursday. It’s depressing to know that some, but certainly not all of American’s knowledge of Canada is similar to this, even in this day and age.

The following video was published by The Daily Coin.org on Sep 21, 2016

Almost a year after Greece surrendered into the arms of the international lenders and the International Monetary Fund and the austerity cuts started to affect people’s lives. One Greek explains the dismal reality of everyday life for many…
Did you know that there are people in Greece who cannot afford to buy even a loaf of bread at a cost of 0.60 – 0.70?
A bakery in our neighborhood was offering a bread at a special price for pensioners and unemployed. The special price was just half a euro.
At one point, I remember that more and more people were going to this bakery and asking for bread from the previous day for a couple of cents or even free of charge.
Two days ago, the grim Greek reality hit me again. I was at the bakery sometime at noon. All different kinds of bread loafs were waiting for customers, nicely set in order, one by one, next to each other.
Yet, somewhere, in a corner at one of the lower shelves there was a group of breads: several loaves, long and round, white and wholewheat, a couple of baguettes. 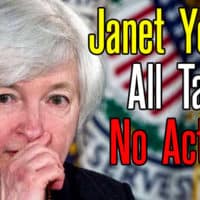 The real product of the Fed these days is not monetary policy but disbelief. People can’t believe the amount of speculation, conversation and outright complexity that results in… nothing.
Yellen is basically presiding over the deflation of the Fed’s reputation. Every month more and more credibility leaks away.
And this month was no exception. For weeks leading up to the FOMC meeting on Wednesday, there were grim articles and interviews stating that a ‘hike’ was possible if not probable.
And again nothing happened. I’m not surprised of course.
Since we started TDV, I’ve said that they’d never raise rates again (and have had people laughing at me for more than six years now for that stance.

This post was published at Dollar Vigilante on SEPTEMBER 22, 2016.

Optimism has returned to markets post the BOJ and FOMC.
Following the Fed’s “hawkish hold” and the BOJ’s “confused contradiction”, global risk (and non-risk) assets got the green light, and as a result stocks and bonds rallied in Asia and Europe, with US equity futures rising another 0.4%, advancing with oil and industrial metals, as iron surged in Chinese trading.
“The looser for longer message from the Fed and the lowering of the median point of rate rise projections is seen as a plus for risk assets as can been seen in global equities,” said fund manager GAM’s head of multi-asset portfolios, Larry Hatheway.
Looking back at the Fed’s decision, Yellen signalled she could hike rates by year-end as the labor market improved further, but cut the number of rate increases expected in 2017 and 2018. Yellen also reduced its longer-run interest rate forecast to 2.9 percent from 3 percent. Richard Franulovich, an analyst at Westpac, noted that back in June the median ‘dot plot’ showed five hikes to end-2017. Now it is down to just three.
“We do not feel that the dollar has the wherewithal to make a more concerted run higher in the next few weeks,” he added. “The FOMC is unlikely to deliver anything more than a very ‘dovish’ December hike.”