This post was published at The Real News Network

Venezuela has the largest proven oil reserve in the world. However, they are out of gasoline. The government has attributed this to poor management which has led to the stoppage of 80% of the country’s refineries. So much for socialism. The assumption that government is competent of managing anything is proven by this very example.
My old friend, Milton Friedman, said it best:
‘If you put the Federal Government in charge of the Sahara desert, in 5 years there’d be a shortage of sand.’

This post was published at Armstrong Economics on Dec 28, 2017.

Venezuelans are struggling to carry out basic transactions like purchasing food as the value of their currency, the bolivar, has plunged against the dollar amid the country’s worsening economic collapse.
According to Reuters, over the past year, Venezuela’s currency weakened 97.5% against the greenback: Put another way, $1,000 of local currency purchased in early January would be worth just $25 now. The annual inflation rate in 2017 could reach $2,000. Though at least one other estimate puts the real rate of inflation closer to 2,800%.
Of course, President Maduro has blamed websites like DolarToday – which publishes the closest thing to an official black-market rate by surveying clandestine exchanges in Caracas and other cities – for the spread of black-market activity, part of a conspiracy organized by Washington and his local political opponents to force him from power.

Fifty years ago, the world was a very different place.
PCs and smartphones were the stuff of Sci-Fi and numerous nations found themselves at crucial crossroads in their evolution.
While Russia and US could arguably be back in another Cold War, Pew Research asked 43,000 around the world whether life is better (or worse) now than 50 years ago.
The results may surprise you…

The Bank of England is putting the United Kingdom on alert. Should the UK keep borrowing money, there will be a ‘Venezuela-style’ economic collapse that will devastate normal citizens.
A senior Bank official has warned that the UK’s economy would be unlikely to survive borrowing any more cash. Richard Sharp, a member of the Bank’s Financial Stability Committee, claimed an extra 1trillion had already been borrowed since the 2008 financial crisis, and any more could see the economy collapse in the same quick manner that Venezuela’s did.
The Times reported on the stark warning mere days after Philip Hammond announced a 25 billion spending spree in the budget.

This post was published at shtfplan on December 13th, 2017.

The gradual acceptance of digital currencies, with major exchanges about to launch bitcoin futures trading, may prompt some oil producing nations to ditch the US dollar in crude trade in favor of cryptocurrencies, an oil analyst says.
***
As RT reports, Russia, Iran and Venezuela have more than one thing in common.
All three are major oil producing nations dependent on the dollar since the global crude market is traditionally dominated by contracts denominated in US currency.
Moscow, Tehran and Caracas are also facing US sanctions; penalties which are proving effective since the sanctioned countries are dependent on the US dollar to sell their crude.

What if bitcoin is a reflection of trust in the future value of fiat currencies? I am struck by the mainstream confidence that bitcoin is a fraud/fad that will soon collapse, while central bank fiat currencies are presumed to be rock-solid and without risk. Those with supreme confidence in fiat currencies might want to look at a chart of Venezuela’s fiat currency, which has declined from 10 to the US dollar in 2012 to 5,000 to the USD earlier this year to a current value in December 2017 of between 90,000 and 100,000 to $1: *** Exchange Rate in Venezuela: On 1 December, the bolivar traded in the parallel market at 103,024 VED per USD, a stunning 59.9% depreciation from the same day last month. Analysts participating in the LatinFocus Consensus Forecast expect the parallel dollar to remain under severe pressure next year. They project a non-official exchange rate of 2,069,486 VEF per USD by the end of 2018. In 2019, the panel sees the non-official exchange rate trading at 2,725,000 VEF per USD.

This post was published at Charles Hugh Smith on SUNDAY, DECEMBER 10, 2017.

Three months ago, in a not entirely surprising move meant to circumvent US economic sanctions on Venezuela, president Nicolas Maduro announced that his nation would stop accepting dollars as payment for oil imports, followed just days later by the announcement that in a dramatic shift away from the Petrodollar and toward Beijing, Venezuela would begin publishing its oil basket price in Chinese yuan. The strategic shift away from the USD did not work quite as expect, because a little over two months later, both Venezuela and its state-owned energy company, PDVSA were declared in default on their debt obligations by ISDA, which triggered the respective CDS contracts as the country’s long-expected insolvency became fact.
Fast forward to today when seemingly impressed by the global crypto craze, Maduro on Sunday announced the creation of the “Petro“, Venezuela’s official cryptocurrency “to advance in the matter of monetary sovereignty, to make financial transactions and to overcome the financial blockade”.
“Venezuela announces the creation of its cryptocurrency, the Petro; this will allow us to move towards new forms of international financing for the economic and social development of the country,” Maduro said during his weekly television program, broadcast on the state channel VTV. 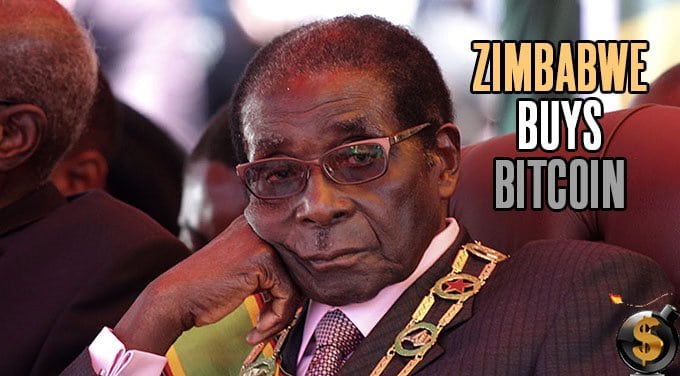 Bitcoin has just blasted to another new all-time high of $8,055!
***
But, that is the US dollar price.
Bitcoin often trades at higher prices in relation to other currencies, but none so much lately as the Zimbabwean ‘New Zim dollar.’
Here’s a little tip. If you have already run one of your fiat currencies into the ground, putting adjectives like ‘Strong’, as in Venezuela’s ‘Strong Bolivar’ or ‘New’ as in the Zimbabwe ‘New Zim dollar’ in front of the name doesn’t make it automatically better.
In fact, if you have the same corrupt, criminal, communists running the country you will very quickly end up with wheelbarrow money again.

This post was published at Dollar Vigilante on November 20, 2017.

In a long overdue, and not exactly surprising decision, moments ago the ISDA Determination Committee decided, after punting for three days in a row, that a Failure to Pay Credit Event has occured with respect to both the Bolivarian Republic of Venezuela as well as Petroleos de Venezuela, S. A.
Specifically, in today’s determination, in response to the question whether a “Failure to Pay Credit Event occurred with respect to Petroleos de Venezuela, S. A.?” ISDA said that the Determinations Committee voted 15 to 0 that a failure to pay credit event had occurred with respect to PDVSA.
ISDA said the DC also voted 15 to 0 that date of credit event was Nov. 13 and that the potential failure to pay occurred on Oct. 12. ISDA also announced that the DC agreed to reconvene Nov. 20 to continue talks regarding the CDS auction, now that the Credit Default Swaps have been triggered.

– Deepening Crisis In Hyper-inflationary Venezuela and Zimbabwe
– Real inflation in Zimbabwe is 313 percent annually and 112 percent on a monthly basis
– Venezuela’s new 100,000-bolivar note is worth less oday thehan USD 2.50
– Maduro announces plans to eliminate all physical cash
– Gold rises in response to ongoing crises
***
A military coup-de-grace in Zimbabwe and a bankrupt Venezuela. Both countries have extreme hyperinflation, citizens are starving and basic medical treatment is near impossible to find. These are the real world problems 47.5 million people are currently facing.
Presidents Robert Mugabe and Nicolas Maduro both deny the crises in their respective countries. For Maduro it is the media propagating false truths. In Zimbabwe the response to hyperinflation has been to declare it illegal.
Both countries are in the media spotlight after a significant week that has left one man powerless and another scrambling to restore faith in his bankrupt country.

Mortgage Rates Set To EXPLODE! Will The Housing Market Crash?

Jeff Currie of Goldman: All commodities in deficit except for gold, zinc, and cocoa

Is platinum price a preview of what’s coming in silver

APMEX running out of many silver products