Watching the current race for the 2012 Republican presidential nomination is probably painful for Ron Paul supporters.  It’s truly unbelievable how the media is ignoring the man, even though he continually rates high on various polls. 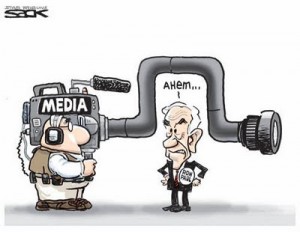 Ron Paul actually wrote The Revolution while he was a presidential candidate back in 2008.  The problems the nation faces today are the same, but even worse. In his book, he spells out solutions by adhering to The Constitution. Dr. Paul emphasises the philosophy of liberty, which is what the founding fathers tried to instill within this document in order to guarantee each citizen their individual freedoms.

Dr. Paul expounds on the concept of freedom:

On foreign policy, Dr. Paul rightly wonders why America has troops in 130 countries around the world. A major part of the national budget shortfall is due to military expenditures overseas.  Yet, reducing America’s international military presence isn’t high on any other candidate’s agenda.

On welfare – social security and medicare – Dr. Paul admits this is difficult because our current system has “taught” people to live off the government. But something has to be done because the truth is that there is no social security trust fund so many people think exists.  All the money the government rakes in from social security tax is put in with all the other taxes and spent on all kinds of government projects. Social Security recipients currently get paid simply because there is an existing workforce paying the tax necessary to fund those payouts. But as the demographics change and the so-called baby boomers retire and start to draw their social security benefits, there will be more recipients than the workforce itself.  Combined with high unemployment, this will only get worse.

But those dependent on social security won’t survive if payments are suddenly cut. So, it will take time to wean those who are welfare-dependent away from government handouts.

Combining the foreign policy and welfare issues above, Dr. Paul’s solution involves cutting social security and medicare taxes by giving the option for young people to “opt out.” This would indeed create a lack of funding for existing recipients. That lack could be made up on the short to medium term by closing all (or most) of the overseas military bases.

The book’s title is The Revolution. It recalls to one’s mind what happened when the 13 colonies broke away from the tyranny of Britain’s King George III. But it seems appropriate to contemplate the infringements on civil liberties the Federal government has been undertaking in recent years. It may indeed take something of a revolution to turn things around.

The Economy is in Complete Turmoil – Nothing is Stable

Watchdog On Wall Street: ‘Not Even Close’ To Seeing Light At The End Of The Tunnel With Inflation

Get Ready for the Foreclosure Festival – It’s about to begin

Rafi Farber: Why the CFTC ‘tamped down’ the silver price

Inflation: Understand History So You Can Predict the Future

Mattias Desmet on Our Grave Situation